We got some really rank chips from the chip shop last week. They were gross, but I am greedy so ate them anyway. As the chips lay in the pit of my stomach I wanted to reach down my own throat and pick them out one by one. I feel a little bit that way about some of the things I saw in the Dunkirk refugee camp.

I kind of wish that I could delve inside my eyeballs and pick out some of the sights. Like the little girl wading towards me as the stinking, soup-like, freezing cold mud sloshes over the rim of her sodden wellies. She’s not distressed, but that’s the most upsetting part. Her little feet and legs have become resigned to it. Even though the mud hasn’t penetrated my boots, my feet are fucking freezing.

I wish I could pick out the image of the man, my age, bent double near a filthy, mud-ridden, soaking wet tent, piled inside with soaking, mud-ridden blankets. He was coughing so hard, a deep nasty cough, that he was nearly sick. He stayed bent double and staring at the floor as mucus oozed from his nose.

If I could, I’d pluck out the image of the armed French police rifling through our van, my bag, our passports, the letter of authorisation we’d been given by the authorities (thanks to Aid Box Convoy), arbitrarily refusing us entry onto the site with our food bags, clothes, tarpaulins, sleeping bags, bottled water and gas cylinders. Heaven forbid anything should get onto the site, during the supposed one-day amnesty, that might just make life on-site slightly less hellish and degrading.

I’d love to erase the image of driving out of the camp into a nice suburban street, straight into a garden centre car park, with lovely houses bang opposite and normal life continuing.

It would be great to be able to forget that feeling of astonishment as people spot a stash of bottled water at the back of our van and start stretching their arms out towards it. “Water my sister!”

I’d asked the volunteer coordinators what to bring ahead of our trip and I’m ashamed to say that when they said bottled water, I didn’t take them seriously. Bottled water? In a camp in the middle of a residential French suburb? On a field flanked by houses and shops with functioning taps? No way!

A friend donated a few boxes of bottled water, after I mentioned it to her, and they flew out of our van like gold dust. There are only 2 taps on the site, set up by medical charity Médecins Sans Frontières (Doctors Without Borders).  I saw a little girl wheeling a wheelbarrow through the mud, balancing 2 large jerry cans of water.

MSF (an aid organisation responding to the world’s most dire medical and humanitarian need) operates a mobile clinic in the camp 3 days a week.  What the fuck is going on?  Are we in Syria?  Why are there only 2 taps serving thousands of refugees who have to wheel jerry cans through stinking mud back to their freezing stinking tents?

Are we in a French residential suburb or still in a war zone?

That feeling of disgust and frustration at myself, on having eaten all those rank chips, can’t even come close to the deep uncomfortable bewilderment I feel at the current migrant crisis.

At the people we label as ‘illegal’. The conditions we are knowingly leaving people in. But they’re not all from Syria! Oh, shock horror! There are other countries in the world which people want to leave because of oppressive regimes, war, military conscription, ethnic cleansing and torture.

France and the UK are dealing with SO FEW people fleeing war and persecution in comparison with Lebanon, Jordan and Turkey. And those who do make it to Europe, after a horrendous journey, after a desperate escape, we consciously chose to allow them to gasp for survival in filthy, freezing, muddy, revolting conditions in a pretty French suburb.

But there are some images from our trip to Dunkirk that I want to leave inside my brain.

The policeman who finally gives us the nod to enter.

Or the 10 year old boy waiting patiently by our van to find shoes for his 3 year old sister. And a group of men, crowding round us in the hopes of finding a clean pair of welly boots to keep their freezing toes from rotting in the mud, push the boy to the front and translate so I know the age of his sister. I see him later, struggling to carry the bags we gave him, but so determined to get them to his family. Jan spots him later still, and gives him a pretend firefighter hat from our toy stash. He gives Jan a beaming smile and wears it on the top of his hoodie.

I never want to forget the humour, as our van struggles in the sloshing mud and a couple of guys in their twenties pretend to blow on the bonnet and keep going, blowing harder and laughing and smiling at us as we start to reverse. A lovely shared joke.

The smiles from the woman walking along behind her husband who is carrying their baby past an indescribably revolting row of Portaloos. Her warm eyes, her nose crinkling as she grins. Her husband holding their sleeping baby so tenderly in his arms, his eyes focused on navigating the mud soup. They look so much like people we’d be friends with.

Another guy runs after our van, once we’ve unloaded all the food bags, and asks me to unwind my window. I’m a little reluctant as he’d been quite pushy in the queue a few minutes earlier, trying to take a bag out of turn. He had politely ignored those who were trying to create order in the frenzy, taking a food bag from inside the van rather than the queue outside. I wind my window down and he says ‘for you my sister’ and offers me the food bag back. “No, no, please” I say smiling, refusing it, giving it back to him. “Salaam, my sister” he says. Oh God. What an extraordinary display of generosity and hospitality. Of perhaps having felt bad about jumping the queue and making amends. I just ache for him and we smile at each other and he clutches his bag and we drive on. I wish so badly that he wasn’t in the degrading position of needing to accept food aid from the back of our van in a freezing cold, muddy hell-hole bang-slap in a French suburb.

It is a scandal that these refugees, migrants, PEOPLE are not being treated as humans. No-one would be able to bear letting any of their children sleep one night in the Dunkirk camp (or the Calais ‘Jungle’, for that matter), let alone feed them a meal cooked there, or even take them in. It is unsafe, inhumane and on our doorstep. Children live alongside rats in faecal sludge. People smugglers prowl amongst unaccompanied minors.

David Cameron it is time to act. Leaving people in such depravity is foolish. Young men are left to fester. Even I felt myself becoming more extreme and fundamental in my beliefs.

Do you know who is doing our country a great service? An extraordinary body of volunteers – largely hippy types like me – keeping the camp afloat. Carefully and skilfully organising (and galvanising) a flow of aid so that it is spread throughout the camp. Teams cooking in tents, camper vans and a make-shift warehouse, turning donated food into delicious meals to distribute. Even more volunteers working in the Calais warehouse, stocked with donations which supply both Grande-Synthe (Dunkirk) and the Calais Jungle. Several of them are staying on-site. Sleeping in the biting cold, the mud, sticking it out even when the police are being bastards and rival people smugglers are firing at each other.

One of the things that made the London Olympics great was the volunteers. Well, there across the channel RIGHT NOW is a formidable body of UK volunteers, working tirelessly despite the conditions, smiling, laughing, joking with the refugees, singing, putting up tents, ferrying sleeping bags, and displaying love in its purest form. And so gracious to Jan and I, who were there for the first time and only stayed one day: “oh thank you so much for coming and so much for your help!” they say, smiling. They stay behind, grafting away in the shit-ridden mud as we drive off, past the police vans, to stock up on cheese and wine at the Carrefour before catching the ferry home to a hot bath before bed. 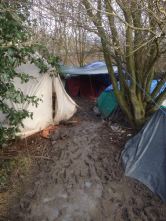 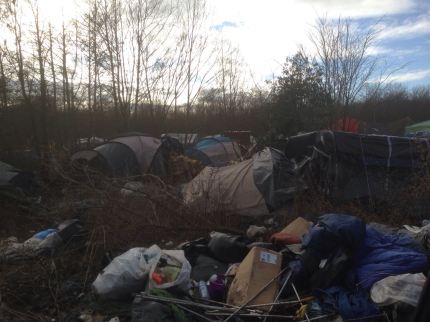 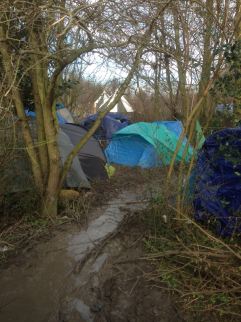 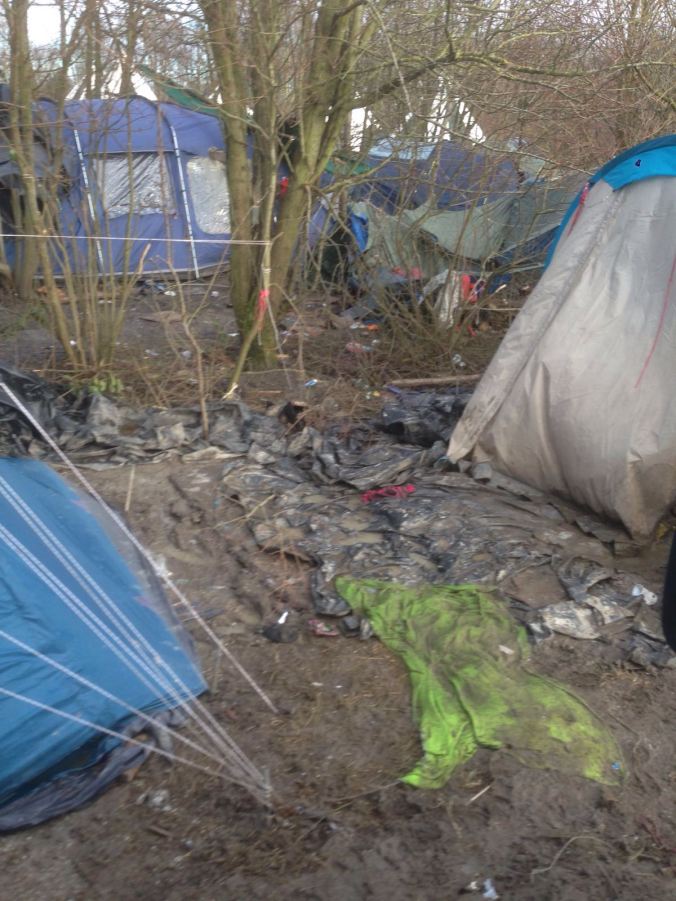